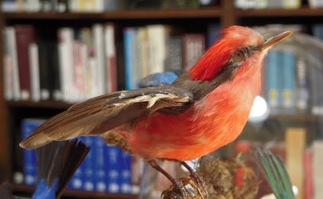 Case 7, Bird 1: The Scarlet Tanager
The Scarlet Tanager (Piranga olivacea) is a medium-sized American songbird. Adults have pale stout smooth bills. Adult males are bright red with black wings and tail; females are yellowish on the underparts and olive on top, with olive-brown wings and tail. Their breeding habitat is large forested areas, especially with oaks, across eastern North America. Scarlet Tanagers migrate to northwestern South America, passing through Central America around April, and again around October. Scarlet Tanagers are often out of sight, foraging high in trees, sometimes flying out to catch insects in flight. They eat mainly insects and fruit. Their nests are typically built on horizontal tree branches. Specifically their numbers are declining in some areas due to habitat fragmentation, but on a global scale tanagers are a plentiful species. 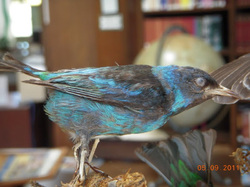 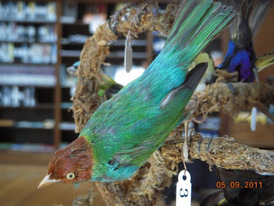 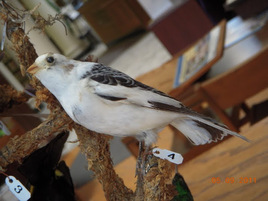 Case 7, Bird 4: The Snow Bunting
The Snow Bunting (Plectrophenax nivalis), sometimes colloquially called
a snowflake, is a passerine bird in the bunting family Emberizidae. It is an arctic specialist, with a circumpolar Arctic breeding range throughout the northern hemisphere.  It builds its bulky nest in rock crevices. The eggs are blue-green, spotted brown, and hatch in 12–13 days, and the young are already ready to fly after a further 12–14 days. The species is not endangered at present, with good populations. It shows little fear of humans, and often nests around buildings in Arctic areas, readily feeding on grain or other scraps put out for it. The breeding habitat is on tundra, treeless moors, and bare mountains. It is migratory, wintering a short distance further south in open habitats in northern temperate areas, typically on either sandy coasts, steppes, prairies, or low mountains, more rarely on farmland stubble. In winter, it forms mobile flocks. 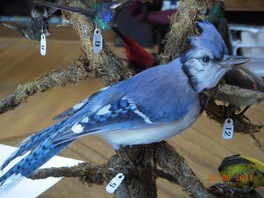 Case 7, Bird 5: The Blue Jay
The Blue Jay (Cyanocitta cristata) is a passerine bird in the family Corvidae, native to North America. It is resident through most of eastern and central United States and southern Canada, although western populations may be migratory. It breeds in both deciduous and coniferous forests, and is common near residential areas. The Blue Jay mainly feeds on nuts and seeds such as acorns, soft fruits, arthropods, and occasionally small vertebrates. It typically gleans food from trees, shrubs, and the ground, though it sometimes hawks insects from the air. It builds an open cup nest in the branches of a tree, which both sexes participate in constructing. The clutch can contain two to seven eggs, which are blueish or light brown with brown spots. Young are altricial, and are brooded by the female for 8–12 days after hatching. They may remain with their parents for one to two months before leaving the nest. Blue Jays have strong black bills used for cracking nuts and acorns, and for eating corn, grains and seeds, although they also eat insects such as beetles, grasshoppers, and caterpillars. 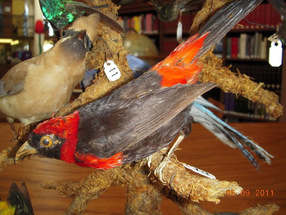 Case 7, Bird 13: The Crimson-Collared Tanager
The Crimson-collared Tanager (Ramphocelus sanguinolentus) is a rather small Middle American songbird. It was first described by the French naturalist René-Primevère Lesson in 1831, its specific epithet from the Latin adjective sanguinolentus, “bloodied”, referring to its red plumage.

This species is sometimes placed in a genus of its own as Phlogothraupis sanguinolenta, and a genetic study suggests that it is less closely related to the other Ramphocelus tanagers than they are to each other. Its closest relative is the Masked Crimson Tanager.

Crimson-collared Tanagers average 19–20 cm (7.5–8 in long. The adult plumage is black with a red collar covering the nape, neck, and breast (remarkably similar to the pattern of the maleCrimson-collared Grosbeak). All tail coverts are also red. The bill is striking pale blue and the legs are blue-gray. In adults, the irides are crimson, contrary to what is shown in Howell & Webb. Females average slightly duller than males, but are sometimes indistinguishable from them. Juvenile birds are similar except that the hood is dull red, the black areas are tinged with brown, and the breast is mottled red and black. Young birds also have a duller bill color.

Vocalizations are high-pitched and sibilant. There are several calls; one rendered as ssii-p is given both when perched and in flight. The song is jerky and consists of two-to-four-note phrases separated by pauses, tueee-teew, chu-chee-wee-chu, teweee.

The Crimson-collared Tanager ranges from southern Veracruz and northern Oaxaca in Mexico through the Atlantic slope of Central America, to the highlands of western Panama. It inhabits the edges of humid evergreen forests and second growth, where it is often seen in pairs at middle to upper levels.

The nest is a cup built of such materials as moss, rootlets and strips of large leaves such as banana or Heliconia, and is placed at middle height in a tree at a forest edge. The female usually lays two eggs, pale blue with blackish spots.